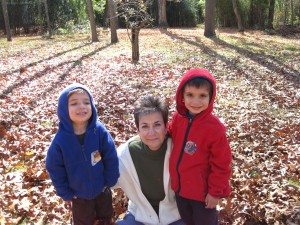 Gaga and the boys

Five years have passed since I became a grandmother. I still find that word- grandmother– an uncomfortable fit. In my mind a grandmother is old, and crotchety with orthopedic shoes and little patience. I shared a room with my grandmother until I was 13. She seemed like an alien being or a different species. I don’t ever remember having a conversation with her, let alone playing a game. So when my turn came to be a grandmother I needed a name that suggested grandparenthood; at the same time it had to have some pizzazz. I had lots of possible names picked out but lo and behold, I was dubbed “gaga” by my first grandson, Zachary. It’s a strange sound, a sort of animal noise or a sound you make when you swallow your gum. I didn’t whole heartedly embrace the name until it was flaunted by Lady Gaga. Suddenly, the name called up a woman who was light years away from the stereotypical grandmother. Instead of an arthritic, grouchy, peculiar grandmother, I was a cool, lively, outrageous, fun gaga. And so in a  world of grandmas and mom moms and nanas, I answer proudly to the name gaga. I embrace my new role as gaga to my grandsons, two boys who are definitely above average. Maybe later in my seventh decade I’ll suggest a more dignified name.