TV Parents are Passing On 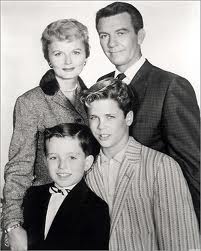 Barbara Billingsly, AKA June Cleaver, died a few days ago. She is the last remaining 50’s parent, so that leaves all of us 60 somethings orphans. Ward, Jim and Margaret Anderson, Donna and Alex (was that his name) Stone , Ozzie and Harriet are all in that TV station in the sky. I’m not surprised that June survived into her 90’s. She was so tall and upright, stiff and starchy. It almost seemed like an effort when she reached down to give her sons a perfunctory hug. But she cared. She and Ward. They sat around, long after the boys were bedded down, talking about them- their fears, quirks, and good points. They worried but they also seem so sure, so secure, so absolutely certain that their boys were growing up and out into a positive world and that they could usher them there in safety and love.
I miss June’s starch and pearls. The TV parents of today are shaky and confused. They seem to be dominated or overawed by their children. The problems their TV children face aren’t totally different from those of the past, but they are more severe, more ugly, more desperate. There doesn’t seem to be a sense that these parents can protect their children, let alone raise them up to take their place in an unstable world with wavy parameters.
I loved those TV parents. I wanted my parents to be like them. I vowed that I would be like them when I grew up: I would have Donna Stone’s sweet manner; Jim Anderson’s wisdom and understanding, Ward’s calm demeanor, Harriet’s loving sarcasm, and June’s unflappable style. And to some extent I succeeded …and failed. Good bye, Barbara.