Blessings of the School Bus 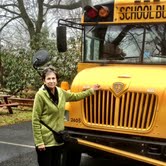 I took a museum jaunt to Philly with Beth El on Sunday. The surprise was that the conveyance was a school bus. Not the streamlined, cushy-seated, electronics-friendly, be-bath-roomed Mega Bus, but a bona fide bouncy, bare-bones school bus. I haven’t ridden in one of these things since 1966 and eyed the big yellow monstrosity with skepticism, since we would be travelling 50 miles on a gray, foggy morning.

Once ensconced, however, the memories started to bubble up. The yellow, smelly, seat-sprung bus turned out to be my madeleine. The daily back and forth to school for 9 years; the Manhattan field trips to museums for doses of culture; the drives to and from summer camp with loud, off-key singing from the kids and yelling from the bus-driver to “Keep it down.” (We welcome you to ___ Day Camp we’re mighty sad you’re here/ We’ll send the air reverberating with a can of beer/ We’ll kick you in we’ll kick you out/ we’ll stuff your mouth with sauerkraut;/Hail, hail the garbage pail/You’re welcome to stay in jail.) How is it possible that the melody and words come back, no problem, after 58 years?

Remember how important it was to sit next to someone on the bus? In junior high, absence of a seat-mate was the kiss of social death. When I moved to a different bus stop in 7th grade, the thought of finding a new seat-mate kept me up at night. Since all the kids I knew were already paired up, I reached out to a girl I didn’t know and didn’t have much in common with, who didn’t seem attached. She accepted my invitation (as desperate as me) and we clung to each other on the bus for four years .Her name was Susan. (A belated thank-you, wherever you are.)

I started to think about some creepy incidents on the school bus. On my bus trips home from day camp, I was one of the last kids dropped off. During the last mile or so, Lew, the bus driver would ask me to scratch his back. I was 8. I picture his giant back clad in a white T-shirt, stained with sweat. I would run my nails up and down his back while he drove, whistling his pleasure. I did it for the better part of the summer. Did I enjoy it? Did I feel special because I was doing something no one else did? Ick.

Great memory of the fear/excitement when a fight broke out between the big kids in the back of the bus.. Thermoses would go flying, girls would shriek, exciting curses would sound. The bus driver would wearily pull over to the side of the road, haul himself out of his seat, and lumber back to restore order. Since this was suburbia in the fifties and sixties, it wouldn’t take him long to stop the melee.

The bus trip was also a way to gear up for the school day. The peaceful roar of the motor (didn’t they make muffler’s for school buses?), the passing scenery, the buzz of conversation, the smell of packed lunches helped with transition from home to school.

The museum was fine, just as it was in the fifties when our teachers took us there on culture-added adventures. But, it was the school bus that proved to be the stuff of poetry, a memory machine that refused to quit as we rolled down I-95.