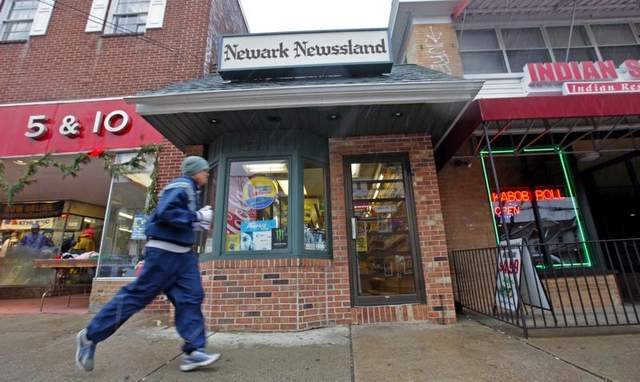 Different from the internet, it was satisfying to touch the glossy pages, to riffle through and get a “feel” for the magazine’s character and that month’s contents. Inevitably the subscription postcard would fall on the floor and you’d retrieve it sheepishly because, clearly, you had probed too deeply into the magazine, when you should really have bought it (or at least that’s how it felt to me).

You got to know the owners and their families and asked after them each time you visited. And, they were always open! Early, late, Sundays, holidays. People needed their reading fix. Right away.

But one by one, these newsstands are closing. The Newark Newsstand bit the dust after 75 years in January of this year. Online media sources have put it out of business. Its wooden shelves and infrastructure have been demolished and carted away. The interior is barren and strewn with rubble. What will be next to go, the iconic 5 & 10 next door?

I hate to be one of those oldsters who bemoans the “good old days,” but wasn’t it actually better when the colorful world was available in hundreds of freshly inked magazines, served up with some candy, soda, and gum?
As a kid, I was sure that people who worked in newsstands were smarter than everyone else, that the magazines and newspapers would leach through their clothing and seep into their brains. And, damn, if I didn’t feel smarter, myself, after one of my lunch time illicit reads at the old, lamented Newark Newsstand!