Home › wisdom › Chocolate: the cure for what ails you

Chocolate: the cure for what ails you 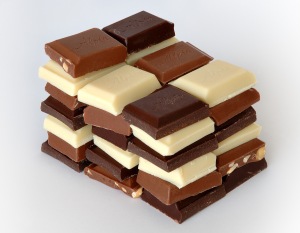 No meal is complete without a piece of chocolate.  It’s rich, it’s thick, it coats your tongue and it makes you forget your troubles.  Vanilla is anemic, strawberry is medicinal, mint isn’t robust… only chocolate satisfies.  Sure, it’s hard to eat one bite or one piece.  But if your diet goes to hell in a handbasket, chocolate might as well be the cause.
And best of all, chocolate has apparently gotten a bad rap as far as its nutritional properties are concerned.  “There is in fact a growing body of credible scientific evidence that chocolate contains a host of heart-healthy and mood-enhancing phytochemicals, with benefits to body and mind.”  (John Robbins: Chocolate’s Startling Health Benefits).
*It’s a source of anti-oxidants
*It inhibits the clumping together of blood platelets, reducing the risks of atherosclerosis
*Contains substances with mood elevating effects: phenethylamine, which triggers the release of pleasurable endorphins
*Produces anandamide that binds to the same receptor sites in the brain as cannabinoids, producing feelings of elation and euphoria
*Chocolate boosts brain levels of serotonin
Of course dark chocolate that has less sugar and fat is better for you. But it would appear that, for the most part, chocolate is one of those healthy pleasures if enjoyed in moderation.  Not that finding out the opposite would stop my chocolate consumption, but knowing that there are some health benefits minimizes the guilt for this sixty something.

The best birthday cake ever