Home › wisdom › They say that all good things must end…..someday

They say that all good things must end…..someday

Ernest Hemingway famously admitted that he had rewritten the ending to his book, A Farewell to Arms “39 times before I was satisfied.” His grandson, Sean Hemingway just edited a new edition of the book so that it now contains all of these alternate endings. It is fascinating to see how many ways the author could have ended his novel, some optimistic and some dispiriting.

Real ending:  “After a while I went out  and left the hospital and walked back to the hotel in the rain.”
Live baby ending: “There is no end except death and birth is only the beginning.” 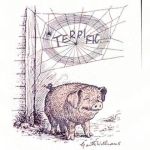 I hope that EB White will forgive me for crossing out his sad ending about Charlotte’s death in favor of the “They lived happily ever after” ending that allowed my small daughter (and the rest of the family) to get some  sleep. Sure, his life-lesson was lost on her but it was sacrificed for a good cause.

Death is the final, ultimate end (depending on your religious persuasion) but people like David Eagleman, author of Sum: Forty Tales From the Afterlives are not satisfied with one interpretation.

Here are two of his endings: ” In the afterlife you relive all of your experiences, but this time with the events reshuffled into a new order: all the moments that share a quality are grouped together.”
“In the afterlife, you are treated to a generous oportunity: you can choose whatever you would like to be in the next life.  Would you like to be a member of the opposite sex? Born into royalty? A philosopher with bottomless profundity? A soldier facing a triumphant battle?”

Everyone talks about wanting closure.  An ENDING.  But this 60 something wants to write her own endings, depending on her mood and whim.  This 60 something is, I’m sure, not alone in wanting to control the endings. To write the endings. To slip them neatly into place when I’m ready. I don’t want to be pinned down to one or even a multiple choice collection of endings.

Hemingway had 39 endings for his book.  As the author, he picked the one he wanted. As a human being, he picked his ending, as well.